A shuffle across SE14 and SE15

The search for a premises begins (again)

After a couple of months rest following the heartbreak of Zuki’s, we were back to searching for premises. It was a long summer of swiping left on Zoopla and Rightmove. The only place that had interested us was a renovated space underneath the railway bridge at Herne Hill. The brochure declared it had similar floorspace to Zuki’s. Can admire the optimism I guess. 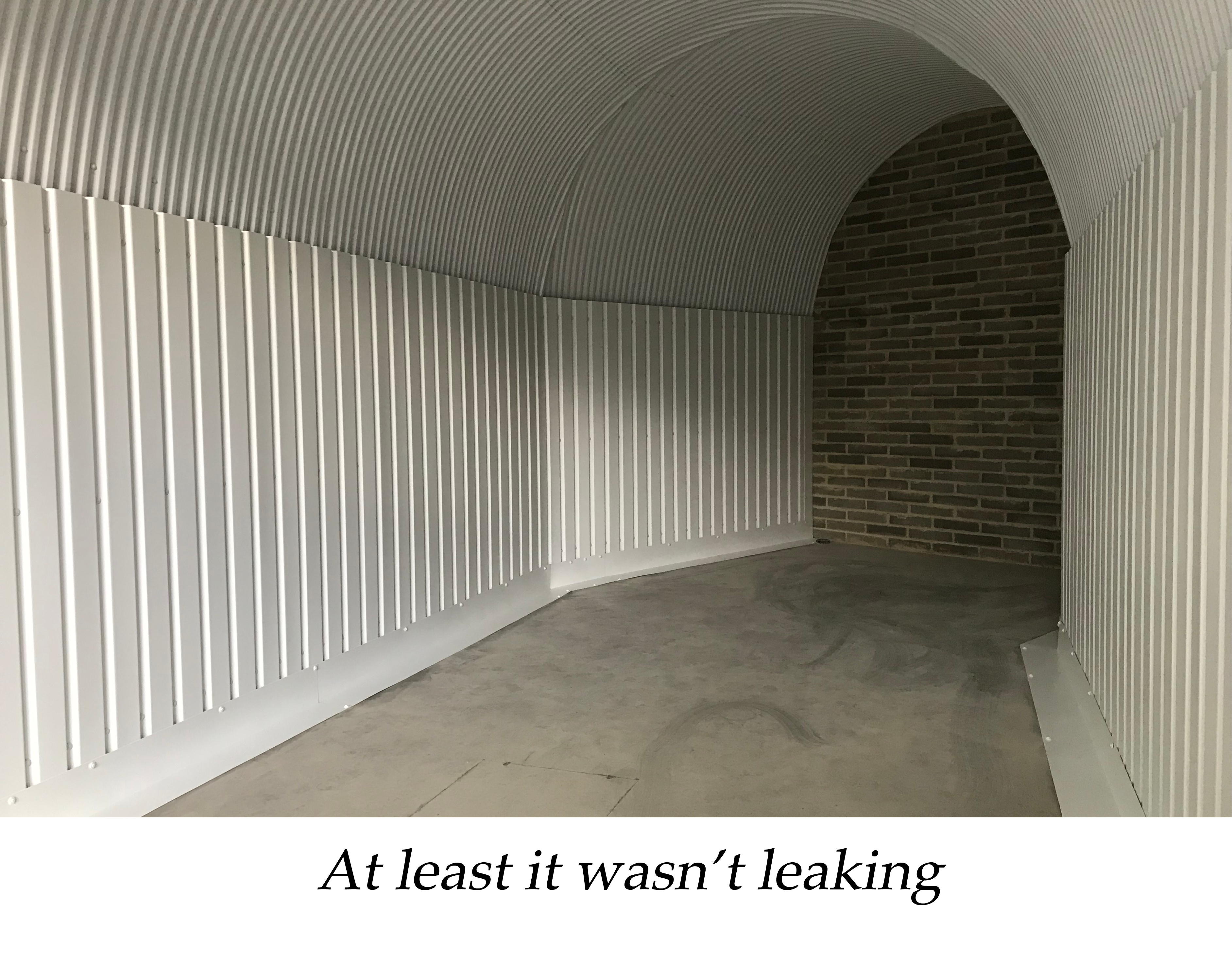 We needed an evening out to raise spirits. There were three proposals for the Friday night in question: the Ealing Beer Festival, including a trip to the Dodo, possibly our favourite micropub; a rerun of the 51 bus micropub crawl or an exploratory route from New Cross to Queen’s Road Peckham. How to decide? Drawing folded up bits of paper out of a Ziploc bag that had been emptied of toiletries. 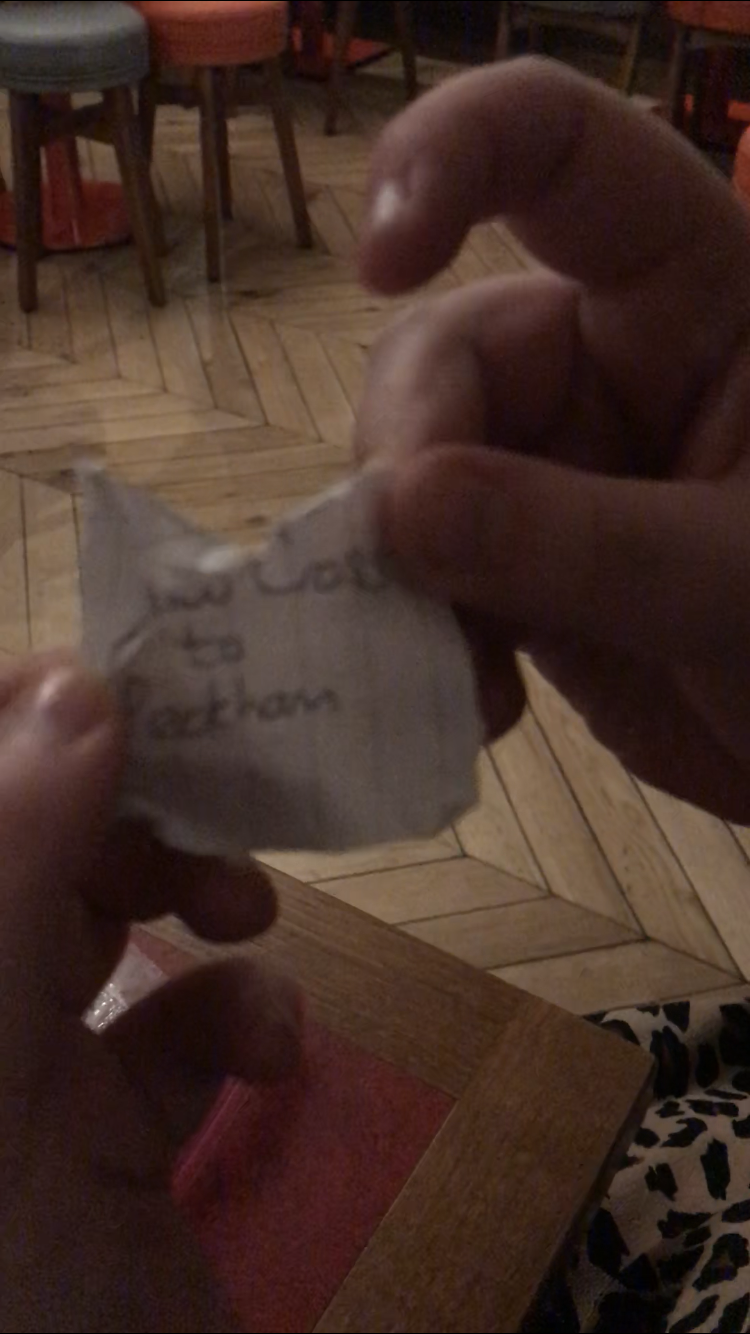 We knew there was a railway arch next to Queens Road Peckham which could fit the bill for the micropub. Plus well worth a wander to see what else was out there. And so in the blistering sun one Friday afternoon In July, we found ourselves in New Cross, about to embark on a meandering pub crawl I'd devised.

We arrived one-by-one in the pub to find a visibly delighted Dave, resplendent in a Hawaiian shirt, relaxing on the sofa with what turned out to be a well-kept pint of Hophead. He was watching Federer-Nadal at Wimbledon by way of a “warm up” for tennis match he had foolishly booked for first thing the morning after. You couldn't ask much more from an afternoon. Well, one thing, we were a member down. Luckily, Stockers arrived in just the nick of time to get another round in and send morale through the roof.

Across the road from the Albert was a recently opened micropub in a basement bar, that had previously been a dedicated comedy and theatre venue. Bez had been very excited to visit when he'd learned the pub had a model railway. We settled down with a pint of Kentish Ale in the back room. Excitement about the forthcoming Cricket World Cup saw the cricket chat (which included a genunine argument about Gary Kirsten's test match average) reach a level where not even the model railway could hold Bez's attention anymore. Given it was the nicest day of the year, this was probably a sign we should head back outside. 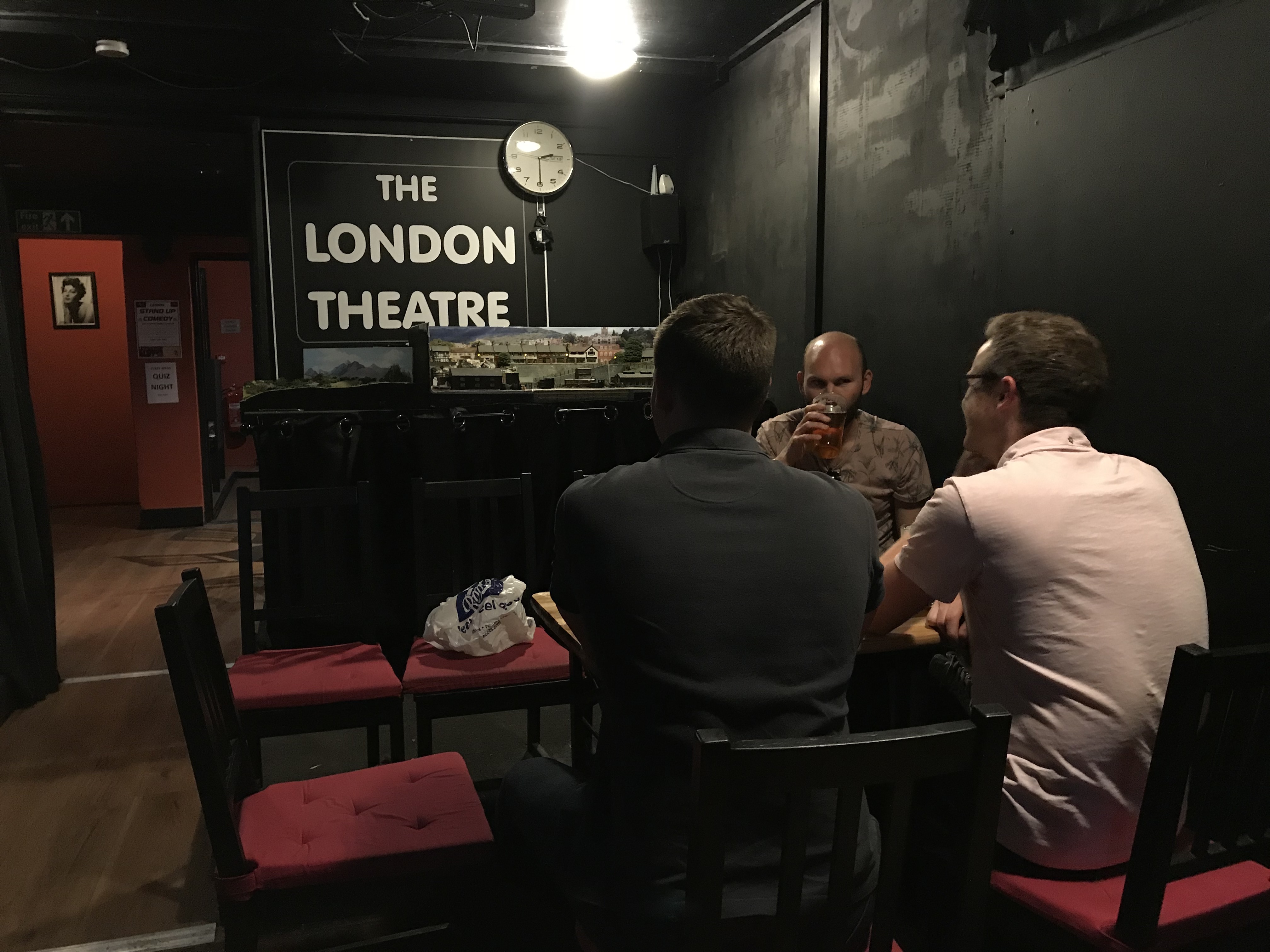 This live music institution was not a place we had planned on visiting. But a very difficult building to walk past, as is often the case with pubs. A limited selection saw halves of Guinness served in Brewdog glasses all round. 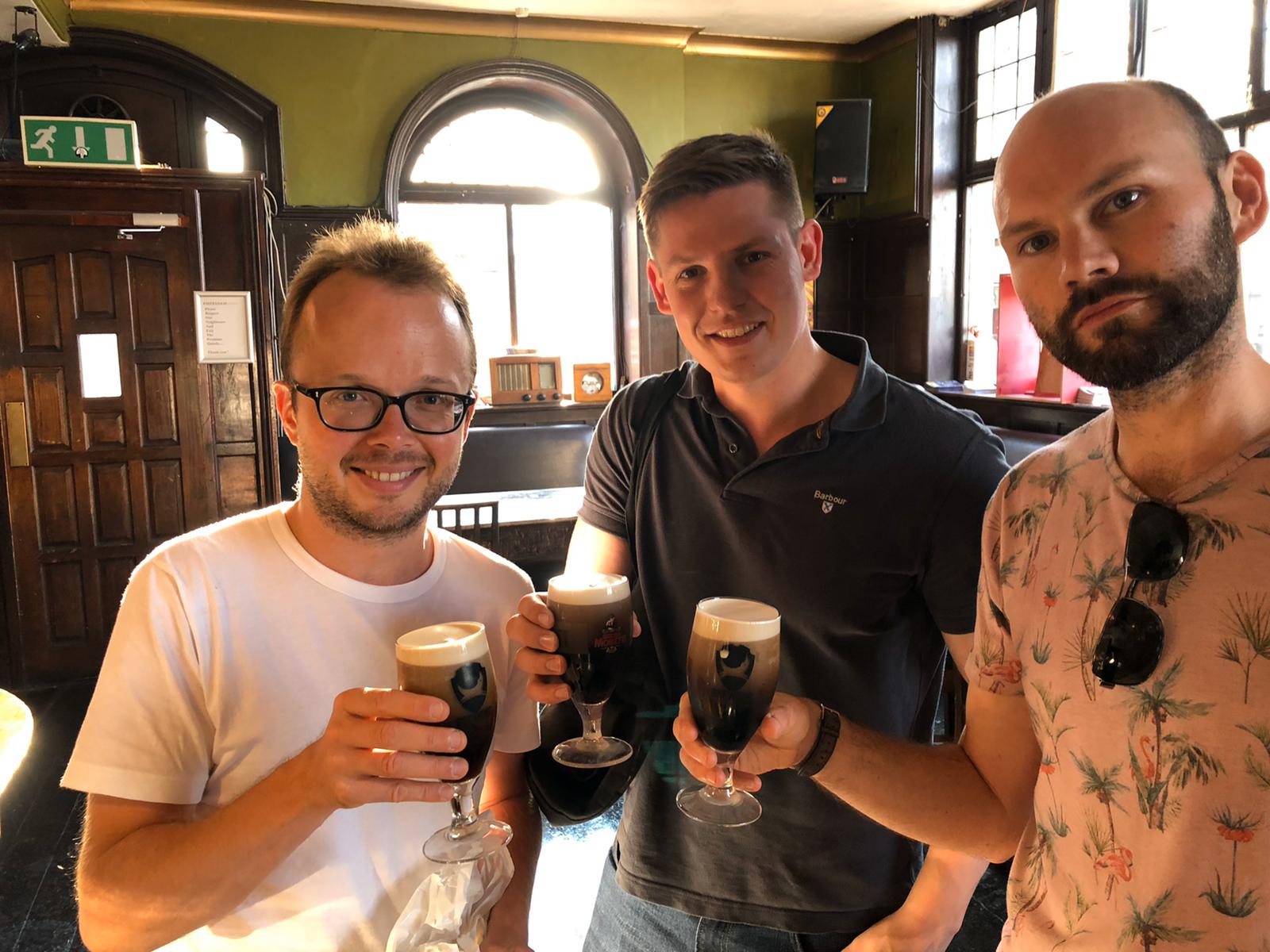 It was now time for the main event of the afternoon. Bez had brought with him the first production bottle of 'The Camberwell Shark', a 6.8% hazy DDH pale ale we had spent a day together brewing back in May. The tension was palpable. Please, please don't be crap.

It was magnificent. As we all tucked into our first taste with the excitement of children at Christmas, it soon became clear the anticpation and excitement were well justified. 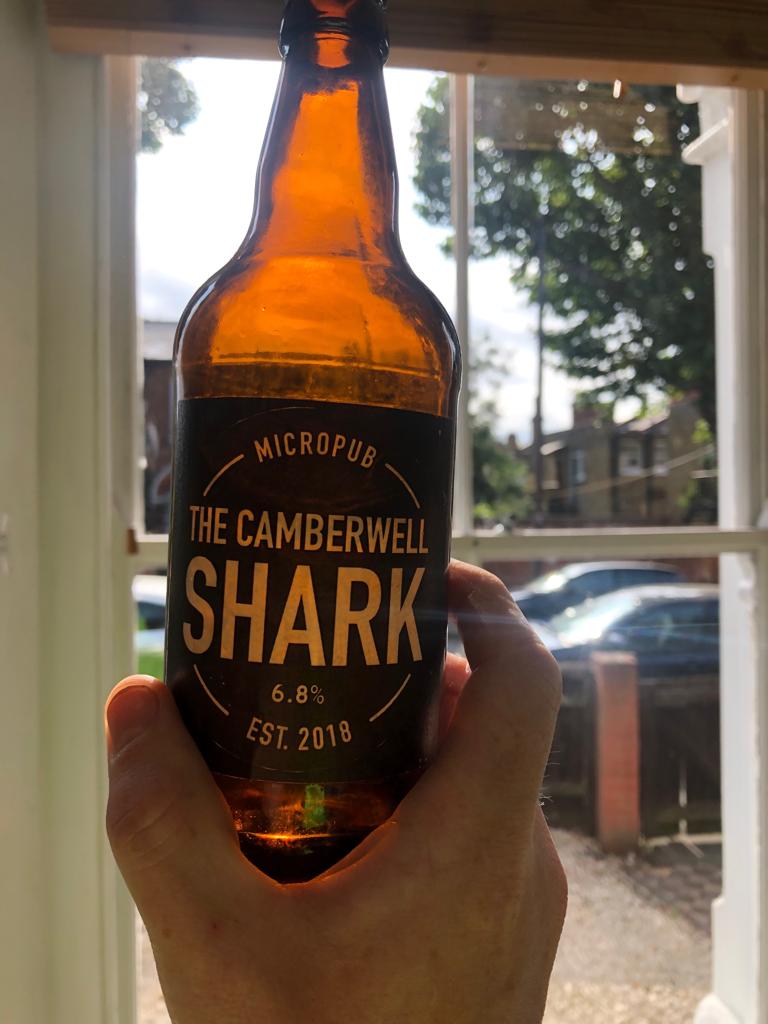 A spring in our step, we set off to a pub that is under threat—ridiculously—from developers. The Hart is a beautiful tiled building on the corner of New Cross Road and Queen’s Road and has an entire set of taps dedicated just to Kernel beer. It’s a marvel. The intention to build flats above this place will surely put at threat a venue that relies on the income driven by brilliantly curated live music nights. To lose a place of this quality would be mindless.

We retreated to the roof terrace with pints of Table Beer all round, which Stockers boldly claimed would be his choice “if I could only drink one beer for the rest of my life." After drinking it in the fading sun, surrounded by excellent pub dogs, it was hard to disagree. In fact I’d have been happy to stay on that roof terrace for the rest of my life but lest we forget, this was a work rather than pleasure trip. 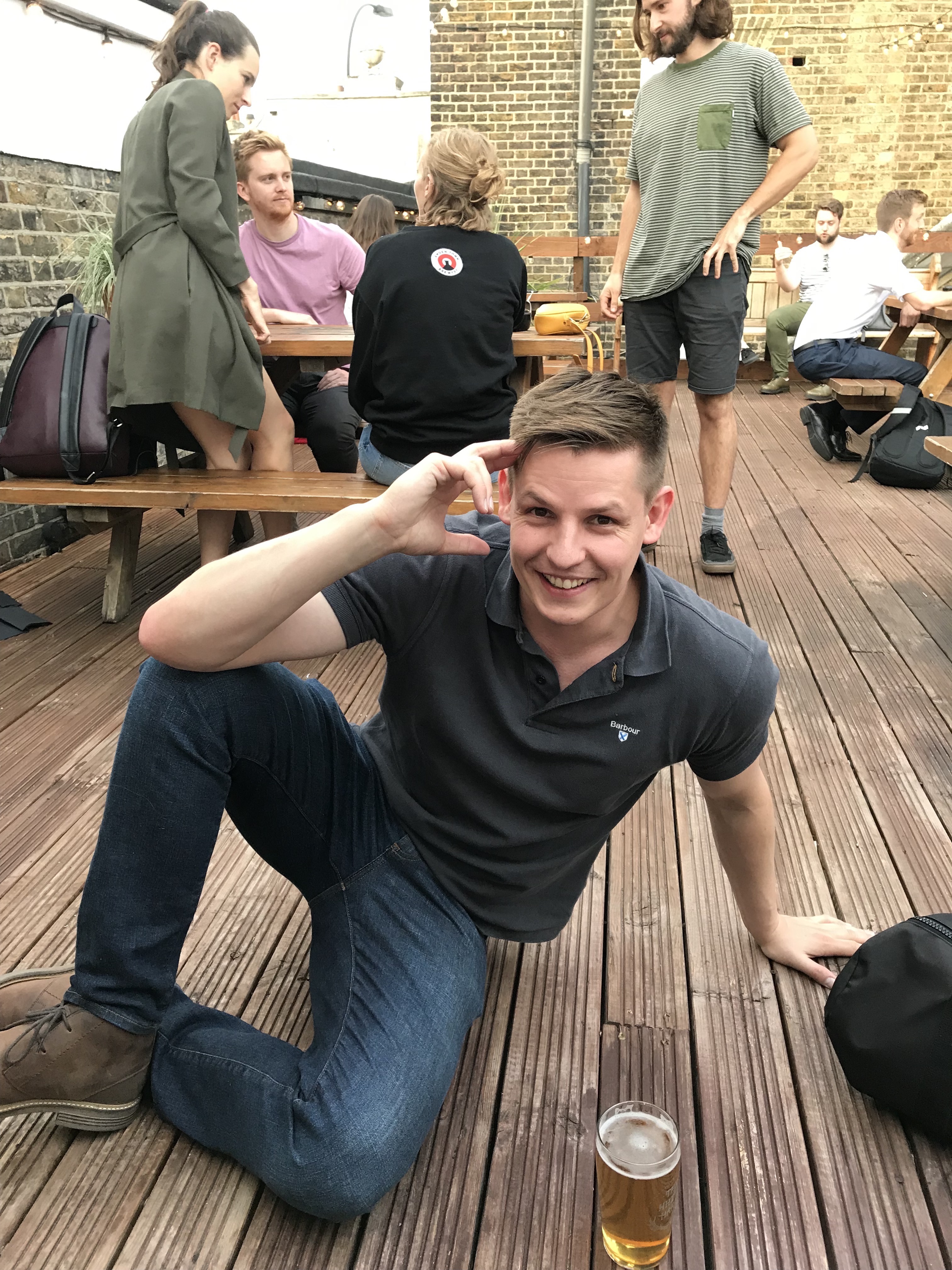 A bit more of a wildcard. Famous in the past for live music but not one any of us had actually visited before. We entered to find the cavernous and dark building almost empty, with music blaring. The barman told us they were “closing down” soon and that spirits were all on offer. We stuck to our guns—namely beer—and tucked into the array of pub games on display.

A quick trip for a takeaway from Mamma Dough just up the road ensured we had sufficient energy levels for the marathon Shuffle Board game to come. I don’t say this lightly, but as pub games go it’s up there with Bar Billiards. Amy had arrived at this point and was an immediate convert to the game which soon had us hurling around nonsensical phrases like seasoned pros: “It’s a huge target!”, “On for a 9er here…”, “Greatest run of the modern era”. I’m genuinely not sure I knew the rules. The excitement was all too much for Amy, who promptly announced she was off. 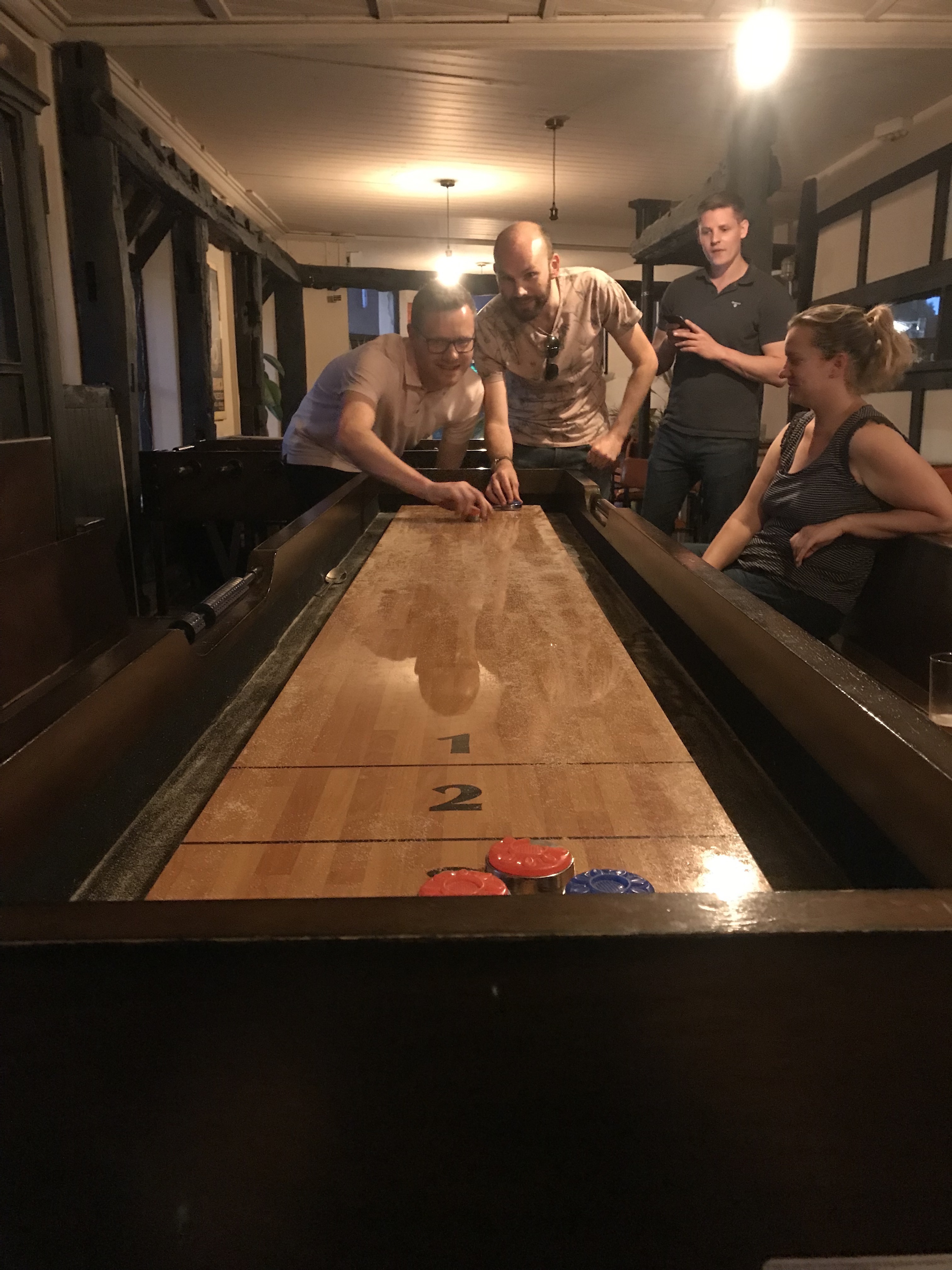 And then for some actual research. We cast our eyes past Blackbird bakery outside Queens Road Peckham train station to investigate an interesting looking arch. Hard to see too much behind locked gates but probably not the one for us by the looks of it.

Proud of our efforts in having clocked off some serious pub business, we settled down outside at one of the finest pubs around. Four magnificent pints of Northern Monk ale our reward. What more could you possibly ask for? Well, ideally that they never shut. It turned out that the shuffleboard game had gone on for longer than we had realised, and last orders was imminent. 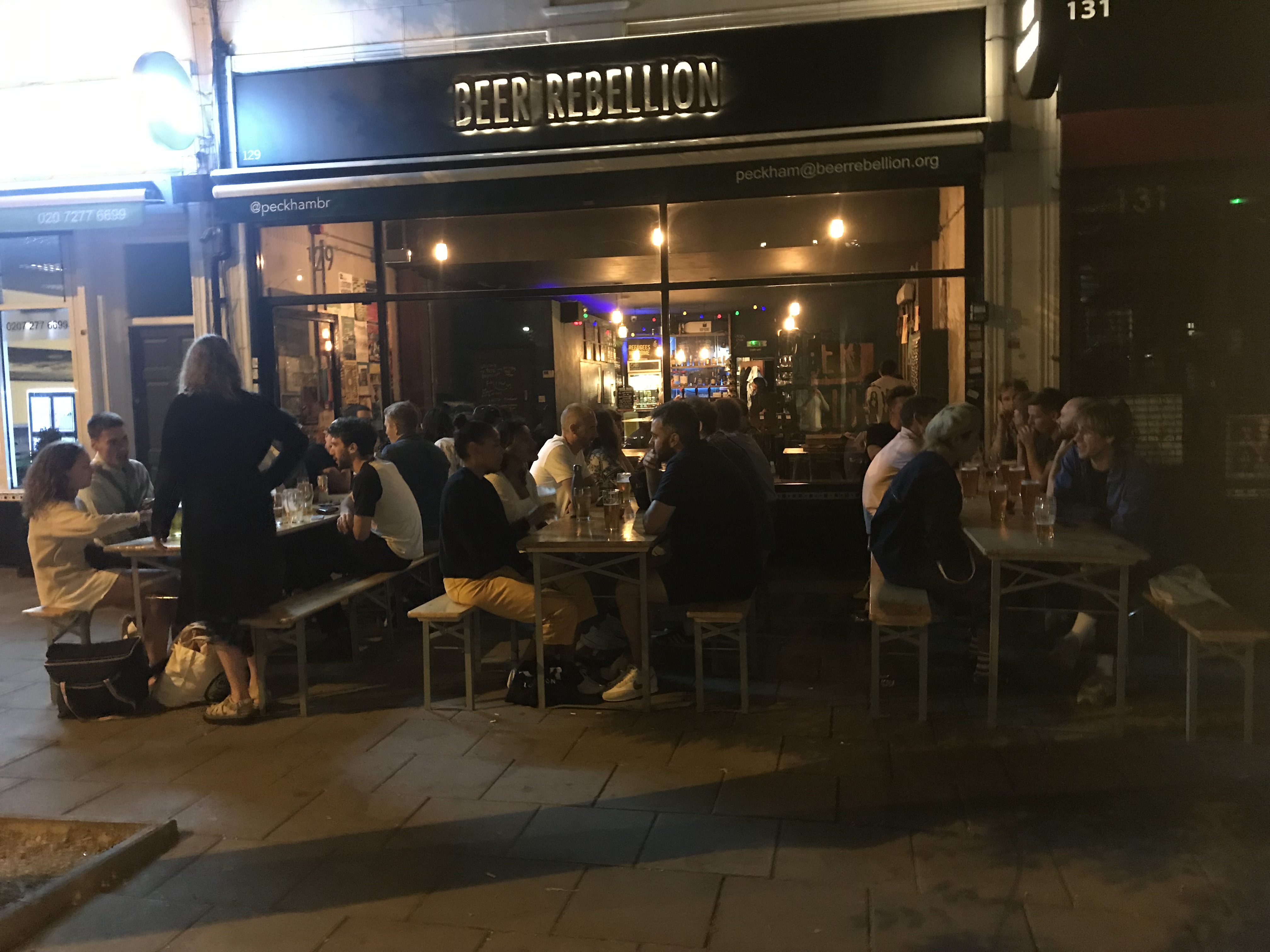 Dave, acknowledging the fact his preparation for the tennis match tomorrow was perhaps not ideal, decided to head home. We'd completed my planned route but I had one more pub up my sleeve.

An old estate pub which had been renovated recently to include a cocktail bar and perhaps more of a focus on craft beer, with many of the keg lines dedicated to Brixton. Over a final Guinness, we were pleased to reflect that we had confirmation we were all still very much up for opening a pub. And not only that, we'd completed a gruelling eveing of research.

I heard from someone I knew living above the New Cross Ale House that the landlord was looking for new tenants. We considered it briefly but it's probably a bit of a push for Bez and Stockers to get there. The Montague Arms has shut and was open to offers last time we heard, a bit out of our price range though. The White Hart has been saved from the threat of flats above it thankfully.

We'll have some exciting news to reveal, hopefully later this week, involving one of the pubs we visited above...

We are Andy, Ben, Dave and Graham and we are hoping to open a micropub in Southwark soon...